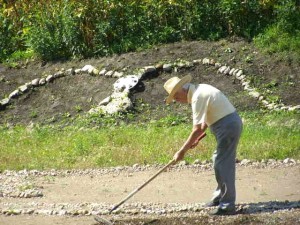 “What in the world is that man doing?!” I asked attorney Zach Hesselbaum. It was a perfect summer afternoon and we had just left a client’s home at Alden of Waterford.  We could see a man creating something with homemade tools in an undeveloped area across from the residences.  We just had to get to know this man who, it turned out, was a pro at creating “landscape art”. Dale Chatfield is a man of simple and powerful virtues.  His initiative, integrity, and personality have drawn people to him, and then he has enriched their lives.  Zach and I spoke with Dale and his charming wife Doris.  They have been married 70 years. Dale was born October 10, 1911 in the central Nebraska plains.  He told us, “I grew up on the farm, and when I was a young man it seemed like I knew all the girls in Nebraska—but none of them were right for me!  It was The Great Depression, but I headed off to find my fortune in Denver.”  In Denver he lived frugally, studied accounting, and eventually got a job as an accountant for the Denver/Rio Grande Railway.  But Dale was never meant to just sit at a desk.  He is competitor, and is driven to always do more than what is expected.  Doris beamed and proudly told us, “Dale has spent his whole life going the extra mile.  We had a dry cleaning business for 32 years.  The business, called D&D Cleaners (for Dale and Doris), grew because my husband always gave extraordinary personal attention to each customer.  Even after people moved away from our neighborhood, they would drive back to have Dale do their cleaning.  People value that special personal attention.” Even after retirement, Dale has kept on making life more fun for others.  From 1990 to 2005, he almost singlehandedly did the Christmas decorations and lights around their four-story senior residential center in Denver.  Doris told us, “He was the only one in the neighborhood who decorated all four sides of their building!  Everybody else just did the front.  You know, he climbed up and down those tall ladders even when he got to be 92.” If you want to talk about playing horseshoes, Dale is your man.  He is a champion horseshoe player.  He played in a senior league that included 40 players.  During ten seasons, Dale was champion five years.  Leaving Denver and moving to Chicago in 2005, his biggest disappointment has been that he can no longer find anyone who wants to play horseshoes.  “They all say they have a bad back or a bad arm.  I can’t find anyone who will play with me.” I asked Dale if he could provide me with some of his keys to a long and successful life.  He gave me a handwritten note that reads as follows: Dale is a wonderful life model for the art of being—and living as—a very successful man.