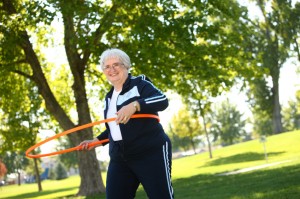 You can play a big part in delaying and/or preventing the symptoms of Alzheimer’s Disease! At a recent Alzheimer’s Association event in Chicago, I was surprised to learn that we can make lifestyle choices that can push back against the effects of Alzheimer’s Disease. Dr. David Bennett of Rush Medical Center reported that based on yearly interviews and later autopsy of participants in the 2,400 person Religious Orders Studies, there are people who have the Alzheimer’s Disease cerebral plaques and tangles but do not experience AD dementia, and/or have a delayed rate of decline. Read on to see how you can choose to model these people.   When the Rush investigative team examined the data, it was clear that the best lifestyle models are those individuals who remain active in the areas of physical fitness and use of their mental capabilities, and have a vibrant social life.  A vibrant social network is defined as having more than seven active and significant relationships (friends, family, and coworkers). People who remain consistently physically active usually have better brain health.  Those who are committed to exercise experience fewer falls, better balance, less brain shrinkage, and a higher level of independence.  For those of you who do not like to sweat, there is still good news.  Physical exercise does not have to be strenuous or require a major time commitment.  However, substantial physical exercise does mean a commitment to the regularity of the activity. If you combine regular physical activity such as walking with mental activity such as Sudoku, and have an active social interaction such as playing cards with your friends or being involved in volunteer activities, then there is a much higher probability for you to successfully push back against Alzheimer’s Disease.  This is good news, in that most of us want to have this type of a lifestyle—we all want to be fit, have wit, and stay “with it.”  Let’s all get off the couch and go for a walk… or maybe a little hula-hooping!