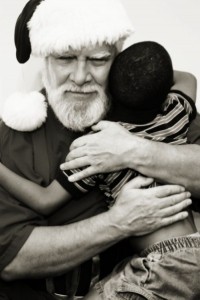 “How do you grow up to become Santa Claus?” I innocently asked the white-bearded man.  Laying a finger aside of his nose, he looked at me gently and told his story. “My birth name is John Scheuch, and Christmas 2009 will be my 34th year as Santa Claus.  Being Santa is a multiple-generation calling—my father, grandfather, stepfather, and uncle have all donned the role.  In 1975, my mother (who knew that I yearned to be Santa) gave me my first custom-tailored suit.  But in those days I had a couple of challenges.  First, nobody recognizes a young Santa with dark hair and beard.  Second, I didn’t know where to go to learn all of Santa’s secrets!  Being Santa is not a “guy-group” activity; you can’t just go hang out with a bunch of Santas to learn—and at the time I couldn’t find a mentor.  Nonetheless, I had a calling to be Santa, so I decided to just start—after all, I had my suit…  So I began to quietly share with a few friends that I was Santa Claus.  One friend asked if I could come and visit his four-year-old son, Rex.  When I agreed, he added, “When you visit, could you please tell Rex to turn out the bathroom light at night?”  That was my first “ah-ha moment” as Santa, because a real Santa knows everything—but how can he, without a little help from the parents? That was 34 years ago, and I am now visiting the children and grandchildren of those I first saw.  I keep a file on every child I have ever visited.  Now when I see a child whose parents I knew when they were children, I will often say, “You know, Mikey, when your daddy was your age he wanted me to bring him a red Tonka truck.”  People are amazed that Santa not only knows all but he remembers everything about them too. Let me tell you about a call that changed my life. One night, I received a mysterious call from a man who identified himself as the Chief Elf of “The Elves of Christmas Present.”  The Chief Elf asked me several questions:  “Do you really look like Santa?  Do you work on Christmas Eve?  Are you afraid to fly?”  He then told me about a gravely ill child who had asked her parents to help her to go to the North Pole, see Santa Claus, and help him deliver Christmas presents.  The Chief Elf asked me to help make that wish come true.  I told him, “I’m your man!” The afternoon of Christmas Eve arrived and I was getting ready.  Suddenly the Chief Elf called again, and with a broken voice he said, “I have bad news…  She died this afternoon…  But her grieving parents want us to go on and take her younger brother.”  Later that night I met a shattered family and a wide-eyed little boy. We grabbed my bag of toys and jumped into a helicopter. Together, we flew through a Kansas Christmas night, delivering Christmas gifts. That moment caused me to want to devote myself to serving children with the greatest needs—children who are terminally ill, children in hospice, and children with a loved one who may be dying.  My passion to serve has led me to become Executive Director of Santa America. It’s a non-profit, volunteer organization that brings love, hope, and joy to special children and their families.” Help Santa John and Santa America to fulfill their mission.  Please go to their website, www.Santa-America.org, and make a contribution to support them in their never-ending work of bringing Santa to exceptional children who are in crisis.