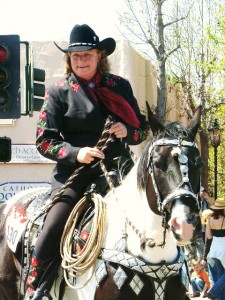 Page Williams with her horse

When I started practicing elder law, the only people I saw as clients were of my parents’ generation.  But now my own boomer generation is also coming through the doors.  Some are afflicted with early onset Alzheimer’s or Parkinson’s, and they are surprised that they now need long term care.  In 1921 Charlie Chaplin and Mary Pickford dreamed that the movie industry folks would always “take care of our own” and started The Motion Picture & Television Fund, which in turn funded the Motion Picture & Television Country House & Hospital (commonly referred to as Motion Picture Home)—a home that is now closing due to bankruptcy. My friend and fellow boomer Page Williams recently sent me an e-mail which expressed her anxiety about her own long term care prospects. She is a board member of a union representing theatrical, stage, movie, and TV show workers who are not actors, producers, or writers.  But what’s really bothering her is that “Like millions of boomers, I chose not to marry or have children.  But I don’t think that we unmarried boomers fully realize that there’s a lot more to worry about now than just long term care for our geriatric parents.”  As an entertainment worker, the closing of the Motion Picture Home has her scared. “I always used to joke with my friend Terry as we were riding along on our horses that some day we would be old and gray and sitting around the MP Home having a drink and remembering these days.  Now I wonder what’s going to happen to us.”  Like other boomers, Page sees promises of retirement era benefits vanishing long before the boomers themselves even arrive at the gates.  Members of her union have paid into the Motion Picture & Television Fund for years with the expectation that if they needed it, that senior home would be there for them.  In great contrast to ordinary nursing homes, the Motion Picture Home has benefited from high profile pre-Oscar fundraising events generating up to $15 million in contributions per year.  Nonetheless, the hospital board says they just can’t carry the alleged $10 million per year nursing home deficit any longer.  They, like other facilities around the country, are receiving insufficient reimbursement from Medicare and Medicaid, the primary sources of governmental health care funding for North American seniors.  Jim Lott, executive director of the Hospital Association of Southern California, complained that Medicare provides reimbursement for only about 87 cents of each dollar that the hospital spends on care. Medicaid reimbursement is even worse, with the state only delivering about 78 cents for each dollar cost of care.  All over the country, hospitals and nursing homes are closing due to inadequate and long-delayed reimbursement dollars owed to them by both the state and federal governments.  The closing of Motion Picture Home is one more warning that both seniors and boomers must work together to insist that our government provide health care reforms that ensure quality end-of-life care.  As we listen to government claims that they are going to provide universal coverage, it would be nice to see examples of our government actually providing excellent care.  Unfortunately, those examples do not exist.  What this means for our readers is that it’s time to get serious about your own long term care security, especially if you’re a boomer. Do not delay investigating—and investing in—long term care insurance. There are some new “hybrid insurance products” that will pay out with either a life insurance death benefit or a long term care health policy. Call your trusted financial advisor today.