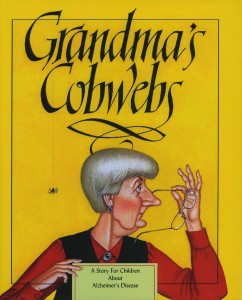 About a year ago, for reasons I can’t really explain, I wanted to find out what books specifically for children had been written about Alzheimer’s.  It was easy to find a book called What’s Happening to Grandpa? by Maria Shriver.  When I went to Amazon.com to find out more about Maria Shriver’s book, I saw a review that said that “Dr. Ann Frantti wrote a book entitled Grandma’s Cobwebs several years ago on the same topic.  Unfortunately, Dr. Frantti doesn’t have the benefit of Ms. Shriver’s ‘star power’ in terms of getting publicity about Grandma’s Cobwebs, but her book is excellent.” Once I saw that quote, I was intrigued at the idea of finding this “lost” children’s book, Grandma’s Cobwebs.  The book is out of print but was available through an online used book service.  I bought the book for $135 (don’t tell my wife, Rose).  Once it was in my hands, I wanted to share it with everyone! With the help of a very artistic and creative team (Shawn Hunt, Angie Moreland, and Catherine Law), the book is now out of hiding for  you to see.  Go to our new website called www.AlzheimersHope.com.  Click on the link and go to the Alzheimer’s Hope home page, and then look directly to the right of the logo to find an icon which reads, “Featured book—Grandma’s Cobwebs, a story for children about Alzheimer’s disease.”  Click on that icon, and you’ll be taken into the world of Ann Frantti when she was caring for her mother Elizabeth and trying to help her daughter Claire deal with Grandma’s ever-growing cobwebs. Claire’s world gets turn upside down by experiencing her beloved grandmother’s struggle with memory issues.  The term “Grandma’s cobwebs” becomes a way for Claire and her grandmother to name the intrusive memory loss. The book was written by Ann Frantti, a gifted educator who recently retired as an award-winning principal of an elementary school in New York.  One of the most poignant lines in Grandma’s Cobwebs is this—“It’s like having my mind filled with cobwebs, and sometimes these silly cobwebs make me so mad!” Please read and enjoy the story.  I trust that you too will be captivated by the storyline, the illustrations, and the fact that this is a true story written by a woman who knows what it’s like to be part of that generation sandwiched between caring for a beloved parent and one’s own children.