Growing Up with Alzheimers 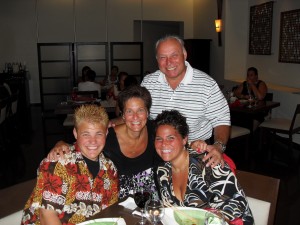 How do you think you would feel if you could not remember a time that your father or mother did not have memory issues?  John Remaly was only nine years old when his dad was diagnosed with Young Onset Alzheimers.   He and his sister Alyssa have grown up adjusting to the gradual loss of their dad’s memory and ability to care for himself. I spoke to John and his mom, Melinda, and asked them to share with me some of the trials and victories that they have experienced during the last few years.  John told me that in his family, they have worked together to provide a united front to withstand Alzheimers’ attack on their family happiness.  “Most people, when dealing with something like this, start to fight and blame each other.  We have decided to use our gift of humor to find creative ways to work with my dad.”  He went on to share with me that his father, Rick Remaly, has always been a guy who loves the quick one-liner jokes and over-the-top comedy.  He says that the family enjoys shows like Will and Grace, Everybody Loves Raymond, and Family Guy.  John and his sister Alyssa love theater and acting, and they have memorized sketches from the different shows, complete with script, dialogue, jokes, and timing.  This helps keep their father engaged and laughing.  John quickly added, “Dad can still catch ‘quick humor’ and he is very easily amused.  In fact, one evening when he was feeling low, I decided that he and I should have a little fun and put calcium tablets in our mouths.  Do you know what happens when you put calcium tablets in your mouth?  It doesn’t hurt you, but you foam like a rabid dog!  Dad and I could not stop laughing.” Melinda added that life at home is not always humorous and that John has had to take on the role of being an adult and a caregiver for his father.  She admires the way John works with his father.  Rick seems to take direction better from John than anyone else.  “When you’re dealing with Alzheimers, you need to work together as a family and be open to sharing with loved ones and co-workers.  You need to be truthful in keeping people informed about the real situation at home.”  She went on to say that it’s very important to be able to go out with friends and to have support systems.  In fact, one of the key principles in helping the Remalys stay emotionally healthy is recognizing that from time to time, you have to get away from the caregiving at home. The Remaly family is about to embark on a new phase of life.  John Remaly has applied to, and been accepted at, Bradley University in Peoria, Illinois.  His dad and mom will be losing one of the pillars that support being able to provide for Rick at home.  John wrote a college admissions essay in October 2009 which detailed his experiences in growing up with Alzheimers.  The entire text is available by clicking on this link: John Remaly’s College Admissions Essay In both October 2008 and October 2009, Melinda Remaly organized a group to participate in the Alzheimers walk in Libertyville, Illinois called “On the Move for Alzheimers.”  Each year the family, friends, and John’s friends from school walked together to raise funds for Alzheimers research.  All the friends and family members wore t-shirts that said. “Walk for Rick.”  On the back of Mr. Remaly’s  t-shirt it said, “I am Rick.” We here at Law Elder Law are grateful that the Remaly family has chosen us to be their legal advocates.