Halloween Fun for Every Age! 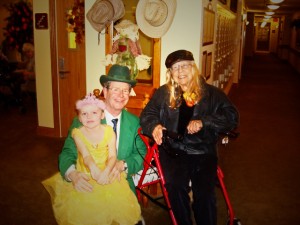 Do you enjoy a chance to act like a kid again?  I sure do!  Recently I received an invitation to a Halloween party at Heritage Woods in Yorkville, Illinois.  My friend, Jane Johnson, is the marketing maven there.  Heritage Woods of Yorkville is a supportive living facility (SLF), more commonly known as an assisted living facility.  Residents of SLFs need a little help from someone with their everyday activities of daily living. I gathered up my costume and my four-year-old granddaughter Lucy and we headed off for the party.  Lucy was dressed up as Belle, who is better known as the “Beauty” in Walt Disney’s movie Beauty and the Beast.  Lucy was my date for the big party. 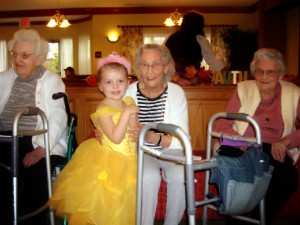 When we arrived, we were greeted by the residents, the staff, and families, many of whom were dressed in holiday costumes.  As with most parties, it was lots of fun and there were way too many good things to eat!  Heritage Woods had a whole day of events.  The staff competed in a chili cook-off—the savory recipes were submitted by members of the local police and fire departments.  Not surprisingly, the dietary manager won first place.  (That seems to hint at the idea that the residents eat mighty fine!)  In second place was my friend Jane Johnson, the marketing director.  She had prepared her favorite “white chili with brown turkey” recipe. 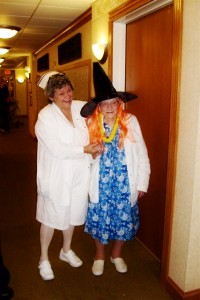 First Place winner Joan with the Heritage director of nursing

More than 75 residents ate chili, listened to music, and enjoyed the ice cream sundae bar.  After lunch there was music and even dancing.  All the employees were dressed in costumes.  Norma, who was dressed as “the scarecrow”, was voted first place for staff costumes.  The best resident costume was won by Joan, who was dressed as a witch.  The pictures in this blog tell the story much better than words. 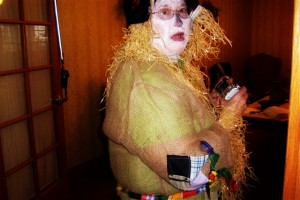 The only thing that surprised me was that many of the residents left the hubbub in mid-afternoon so they could catch a nap and refresh before dinner.  But a great time was had by all!  Thank you, Jane, for inviting me to a fun-filled afternoon at Heritage Woods of Yorkville.