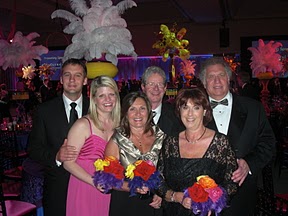 Recently, Kerry Peck of the law firm of Peck Bloom LLC and his wife Hillary invited us to join their table for the Alzheimer’s Association’s Rita Hayworth Chicago fundraising gala.  I am unaccustomed to attending formal black-tie events, but this one was worth the effort.  Princess Yasmin Aga Khan is the gala’s general chair.  Princess Yasmin is the daughter of the 1940s-1950s screen star and pinup girl Rita Hayworth and Prince Aly Khan. Rita Hayworth was the first “reel life” glamour star to become a “real life” princess.  (Grace Kelly was the second.)  Unfortunately, in 1981 Rita was diagnosed with Alzheimer’s Disease.  In those days very little was known about both the illness and proper caregiving.  Yasmin left her career as an opera singer to become her mother’s conservator and chief caregiver.  Following her mother’s death, Princess Yasmin dedicated herself to honoring her mother’s memory by promoting awareness of Alzheimer’s Disease and fundraising in the hope that one day there will be a cure.  The annual Rita Hayworth galas, which are held in Chicago, New York, and Dallas have raised millions of dollars. The theme of the event was “The World is a Circus” and featured acrobats, jugglers, and Cirque du Soleil style acts.  For Rose and me, it was a true joy to attend this fundraiser with our great friends Kerry and Hillary, our daughter and son-in-law Diana Law and Chris Jarot, and other friends of the Pecks. After dinner we danced until 11, when the raffle winners were announced.  Much to my amazement, my wife Rose and my daughter Diana were both “major award winners”! Seriously, there were over 500 people in attendance and only five raffle prizes.  Rose won #4 and Diana won #5.  I feel like a winner, too!  It is my honor to have attended this event the Pecks and their dear friends.  Thank you, Kerry and Hillary! Please consider joining us in donating to find a cure for Alzheimer’s Disease.