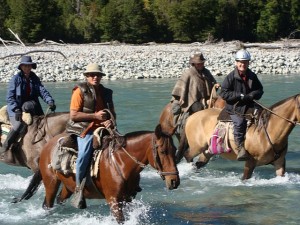 I suppose it was a lot of ego (combined with what little remains of my testosterone) that pushed me to make the decision to ride a horse through the Andes Mountains.  Or maybe it was the great promotional copy and the photos at www.rideandes.com:

“…ride through a stunningly beautiful, remote area of Northern Patagonia along old smuggler’s routes—crisscrossing rivers, skirting around brilliant blue lakes, riding through ancient forests, stopping off to fish or swim in crystal clear waters… an exclusive journey into hidden valleys through this rural gaucho (South American cowboy) culture, from the Chilean Lake District to an Argentine national park.  Enjoy the adventure long after the road has ended in the pristine Patagonian wilderness.”

Wow!  It almost sounded like Robert Louis Stevenson was inviting me to visit Treasure Island.  So, screwing up my courage, I decided to try to sell my wife Rose on this idea.  (She is the one with the common sense in this family.)  “Rose, I want our grandchildren to remember their grandfather as a man who, when he was sixty, rode a horse through the Andes from Chile to Argentina.”  She looked up from her work and calmly asked, “Have you talked to Ken Ireland at Northwestern Mutual about this?”  I answered, “No, why?”  She said, “You need to take out more life insurance before you go.” So with that heartfelt vote of confidence, I did two things: Later, I learned that when my mother heard about my plans to embark on this Andes Mountains crossing, she predicted that I would not come back alive.  I chose not to mention her prediction nor my eight-day horse trek on the Northwestern Mutual Life Insurance policy application. Shortly before the horseback ride, I received a letter entitled “Travel Notes: Essentials!”  We were advised to pack no more than 32 pounds of gear, and told that the airline would fine us for any overweight luggage.  In all caps it stated, “RAIN PONCHOS will be provided.  You must bring suitable waterproof trousers and jackets.  Be prepared for wet and cold mountainous weather.  Bring easy-to-dry clothes.”  What?! I said to Rose, “I’m going in February, but it’s summertime in South America, right?”  Rose got on the internet and discovered that even though my horse trip was in the Patagonian summer, it’s still a mighty cool and wet place.  In fact, one of the side trips that is offered before the ride is a day trip to the island of Chiloe to see the penguins, seals, and an occasional orca whale.  Oops!  I did not own any waterproof pants or quick-dry clothes—but I do now!

The weather did start out cold and rainy, but during the actual ride we had sunny skies.  Every morning was cool and damp, but by 10:30 a.m. we had peeled down to shirtsleeves. The trip was truly one of the travel high points of my life!  If you would like to read the eight-day itinerary, you can click on this link: Ride the Andes Itinerary.  If you would like to view a gallery of our photos from the ride, you can click here to see my photo album. I highly recommend Sally Vergette and www.rideandes.com and Catherine Berard at Open Travel.   I have taken some kind of a progressive horse trek every year since 1985, and this was one of the best ever.  If you have questions or just want more information, please feel free to contact me at rick@lawelderlaw.com. 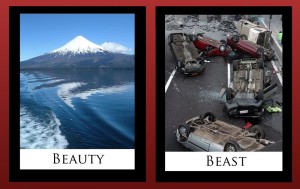