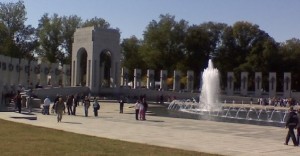 Will Rogers once said, “We can’t all be heroes. Some of us get to stand on the curb and clap as they go by.” I am proud to say that our client Richard Reimer is an American hero.  He served his country in the United States Navy between 1943 and 1946 in the Pacific Theater during World War II.  One of the great blessings of our elder law practice is assisting our wartime veterans with VA long term care benefits.  Richard and his wife Virginia live at Alden of Waterford.  They are provided live-in care by a beloved caregiver named Jean. Despite age-related obstacles, Richard (“Dick” to his longtime friends) joined 79 other veterans and 70 volunteers for the April 15, 2009 Chicago to Washington, D.C. Honor Flight.  Honor Flight’s noble objective is “bringing Chicago veterans to DC – with honor.”  Their goal is to get our surviving World War II veterans to Washington so they can experience “their memorial.” Dick told me that he knows that this memorial belongs to the people. He got involved early, and he personally wrote twenty checks over the years to help fund the project.  He showed me his donor certificate. As a member of the April Honor Flight, Dick was thrilled to hear again the music of the Andrews Sisters as presented by the Legacy Girls.  What a day he had! It was 23 hours from start to stop.  He got to the assembly area at 2:00 a.m. and did not stop until he got back home at 12:01 a.m. the next morning. Although it was a gray, rain-filled day, Dick visited the World War II memorial and the Illinois pillar.  Each state has a pillar with veterans’ names available via a computer monitor built into the pillar.

Richard Reimer at the WWII Memorial in Washington D.C.

Dick was accompanied by his proud daughter, Susan Reimer, R.N.  Susan served the Honor Flight as a volunteer nurse and had to pay her own way.

Susan Reimer with her father Richard

One of the great things about the day was the veteran group was meeted, feted, and greeted at both ends of the flight by bands, cheering crowds, and lots of love.  When I asked Dick to describe what he felt was the most important thing about the Honor Flight, he responded with this: “I am just grateful that after 60 years someone cared.  You know, the first group of guys that got home [from the war]—they they got cheers and bands, but the rest of us… just came home. After the war, I left Hawaii on a liner to go to Treasure Island in California.  Then I took a train from California to Chicago.  From there I went to Great Lakes Naval Station.  At Great Lakes I got discharged.  They gave me the cash they owed me and some car fare and I went home to Elgin.  That was it.” So after 60+ years, Honor Flight of Chicago is providing a way for our World War II veterans who “just came home” to be treated to the welcome that they truly deserve. The Honor Flight needs both funds and volunteers to help more veterans to have their chance to see the World War II Memorial.  Our own Rick Niksic, who serves as the education and outreach director for Law Elder Law, will serve as a volunteer on the Wednesday, July 15, 2009 flight. For more information about how you can help the Honor Flight program, see www.honorflightchicago.org or e-mail Mary Pettinato at mpettinato@introncorp.com. P.S.  It costs about $48,000 per flight to cover the entire cost for 80 veterans from Chicago to Washington, D.C.